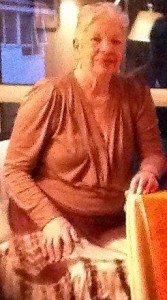 When I was a child in a house spilling over with dozens of Uncles and Aunts, some not much older than ourselves – I always pleaded to go to Aunt Nora’s or Aunt Bridie’s house. Aunt Nora’s house because of the order and stability I found there and Aunt Bridie’s because she let me play with the “pea” in her leg that moved up and down.

As a child, life wasn’t more complex than that – you went where you found something that fitted with you.

I have written elsewhere about the importance of building good mental health for children in real ways as they grow and sometimes children do that for themselves too. I know that it was a good experience in Aunt Nora’s house and I made it my business to get myself there whenever the opportunity arose.

She wasn’t demonstrative and she certainly wasn’t the “Doting Aunt” that I saw in picture books, all dumply and squishy with kisses a plenty: she was tall and elegant and had the best pair of legs you ever did see, but I knew that the Tea Set would be set out and that the house would be quiet and orderly and I truly loved the peace and tranquility of her home.

In rural Ireland, where we all grew up, the Nuns identified quite early that Aunt Nora had academic potential and encouraged her to apply for a scholarship to Trinity College, Dublin but she went instead to England to work.  Her “Trinity College potential” never left her and the scholarship offer was proof, for her, that she was extremely intelligent and I have a suspicion that it subconciously gave her a quiet sense of superiority over the rest of us all of her life.

As I grew, I grew to take her for granted, as you’re supposed to. She had a fiery temper and sometimes you fell foul of it and if you did, you just kept distance for a while and eventually you would meet up at a Wedding and all would be ok (unless you really upset her, in which case you would get a frosty “hello”).

For two years, she has been the greatest friend and we have dined and laughed and I treasured the sense of order and courtesy that she brought with her.

On November 20th 2012, she was diagnosed with inoperable cancer and given two months to live.  You weren’t allowed to mention it to her: “it is what it is” and she insisted that we all just carry on as we always had – wine, whiskey and fun with no mention of the intracies of what was to come.

When the Doctor advised that should take a particular medicine that didnt agree with her – she told him “No – it gives me fat ankles”.  He advised her that she would die, quicker, without the medicine. “Well at least I won’t die with fat ankles!” she said.

On New Year’s Day, she came to my house for a quiz with her husband and sister Eily (EilyFromAmerica) who had flown in from the US to spend some time with her.  Aunt Nora, nominated as “Trinity College Dublin” in the Quiz, beat us all hands down and she was clearly delighted – she always knew she was the most intelligent…..

Aunt Nora died today and I am very sad to lose her, an Aunt and a friend who may well have been the best student that Trinity College Dublin never had.