You really do only get 4,000 weeks in a lifetime, so you may as well do something…

› Eileen Murphy Consultants Blog › Therapy › You really do only get 4,000 weeks in a lifetime, so you may as well do something…

I recently tweeted that, as a guest speaker, I had offered a Positive Action speech instead of the Positive Thinking request that I was asked for. I was asked “surely the thinking comes first?”

I disagree: we struggle to achieve change as individuals because, of course, the subconscious usually sabotages any change the conscious mind wishes to make – you will know that concept well: Diet? “Ah but I love those chocolate treats”. Cut back on alcohol? “But surely red wine is good for me?” Exercise? “Do I really want to put myself through that?”

The trouble with “positive thinking” is that we have to struggle so much with the  “negative, on-guard thinking” that we are hard-wired with for survival purposes. It’s a long old trek for most of us.  Actions, on the other hand, have immediate consequences. Even the cliche “smile and see who smiles back” is proof of that.

I do understand the raised eyebrows when I say that “actions, rather than thoughts, are what creates change”  but I just don’t agree that to make change, one has to change one’s thoughts, that’s all.  I do believe that if we “do” rather than “try to change our thinking” we see the results and that might instigate further actions (even further thought about doing?).

I know when I am talking to clients about “What will they be doing when they are back on track in their lives?”, for instance, they are able to describe in very small detail, the actions – often as small as “get dressed before 4pm, because I normally slob around depressed”.  If I then take the detail further and ask “What will you be wearing?” they can visualise themselves “doing”. If I ask more about what they will be doing once they are dressed: “Will they stay in or will they be going out?” –  I am encouraging further visualisation. If I then give a task, for instance, in keeping with that visualisation: “Because you said that you would be wearing x,y,z before 4pm – I would like to give that as a task and ask that you observe what is different for you, what you do differently at that point – would you accept that as a task?”

My hope is that because its a task that they have described themselves “doing” that it fits with them well and is owned by them rather than me universally dishing out what I think will be an indicator that they have made a small change.  To cut a long scenario short – if they do indeed get dressed before 4pm, in the clothes they described, then, because of “actions” they took – some small pattern will be broken and, who knows? maybe once dressed, it might start to become a new habit to replace the “slob around depressed” one.

Without making this blog 5,000 words, I am going to have to trust the reader that my belief is not as simple in practice as described above: “I ask, they tell, I give a task, they do” but the crux of it is that I do not think I am helping the client by trying to battle with their subconcious – the subconscious, by the way, that has had a long time to reinforce “you will never change” or “change will take a long time” or “what’s the point – you know you don’t like being around other people” or, sometimes, as desperate as “you know this problem, you like this problem because its comfortable – accept it”.

I will try to avoid slipping in any motivational phrases here but “if you put one foot in front of the other – you are walking are you not?”  (and of course – a couple more steps and you’re dancing….) 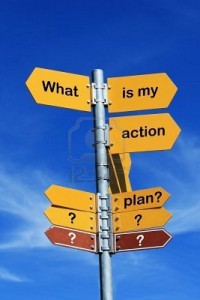 Again, I understand all the arguements about “positive thinking leads to positive actions” – of course it does. My take is that for those living distressed and stressed lives, for those who have little experience of stilling their minds in order to change their minds, for those who are entrenched in the belief that “positive thinking is for those with no problems and time on their hands” or worse still “for those who have had easy lives and indulge in any airy-fairy new fad” – a small action can allow a demonstration of how patterns can be changed quite drastically.

As John Ruskin says: “What you know, what you think, what you believe – is of little consequence. The only consequence is in what you do“.  I have seen, countless times, how people who are disaffected and immersed in addictions or chaotic life patterns have instantly changed their lives because sometime dramatic happened like starting a relationship with a non-user, going back to their family home, getting a job, or my favourite is a tale told to me by an habitual drug user: “I was mistaken for a Key Worker by another user at the clinic and loved the respect shown to me and that was it really – I walked out and never looked back”. Go figure…..

When giving talks about “Positive Action” – I sometimes ask delegates to name an action that they know would change, in any small way, the relationship pattern they are currently in.  The replies vary from “Look at him when he is talking – he always says that I don’t” to “Play the radio at top volume just to confuse my children who think I don’t like music” – no one ever says: “I would think more positively” because that is not the question I asked – I asked about “actions”.

When all of the delegates have finished – I then ask them to raise their hand if they would like an action task to take away with them.  The majority of hands go up, others giggle and put their hand up and take it swiftly down again as if once I gave the task – they were contracted to complete the task (as if I would ever know).  I go back to each delegate and ask for their action task, once they tell me what it is, I give it back to them as “Then that is the action task I am giving you to complete – do you accept?”.  This is a very successful end to the presentation and delegates have fedback that they find it very exciting and they like the “definite action” aspect about the task (despite the fact that they may have been “thinking” about addressing the particular issue for a long time……)

Instant mental health resource for schools...... by @EileenHMurphy - thought it might be of interest @naomicfisher https://brief-therapy-uk.com/instant-mental-health-resource-schools/